Tripawds Supporter sites have no ads!
Skip to content

Tripawds is a user-supported community. Thank you for your support!

sorry not updated for ages… busy life as a teacher and twin mum!! Scooby is doing well. It’s almost 12 months to the day that he had his amputation of his front right leg. He continued with 6 rounds of chemo and is now on a trial of Masivet to try and help prolong his life. We’ve had a few wobbles along the way, a back leg limp, a collapse, a cough, sickness which have had us worried to death and on tenterhooks wondering if we would lose him but we’re so lucky to still have him around!

He was 3 in October and he still acts very much like a puppy, bouncing around and playing with his beloved tennis balls. We’re enjoying every moment we get with him xx


To remove ads from your site and others, upgrade to a Tripawds Supporter blog!

Tripawds is a user-supported community. Thank you for your support!

So it’s been 3 weeks today – can’t  believe it actually. Wow… what a difference it makes; making it to the 2 weeks and  beyond.

Scooby is back to his normal self pretty much. The limp on his back leg has pretty much subsided and he is wanting to play, go for walks and acting like his old self. He’s been jumping up on the sofa, jumping up on us, play fighting with his dad! Honestly, I know everyone says it but it’s so true.. give it 2-3 weeks and they really do bounce back.

The chemo has not affected him at all and hopefully that will continue to be the case. He loves his new harness and so do I! Helps me get him in the car and it looks so smart. Love red on a black labrador.

So he’s going for 5-1o minute walks now… he loves it! Never seen him so happy. 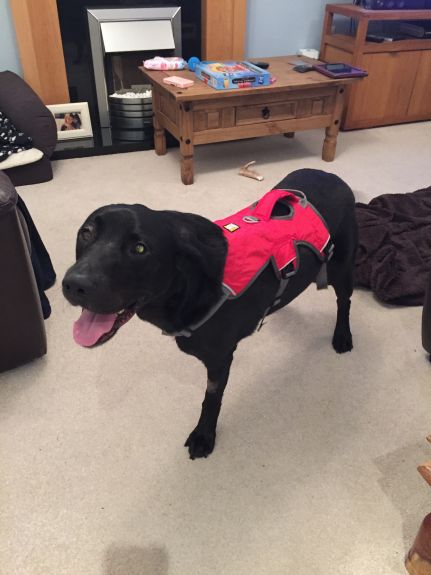 Scooby is doing so well. I’m impatient to get my old doggy back but I keep getting glimpses so hopefully it won’t be too much longer.

He is off the pain meds now and just 1 day left of being on the anti-inflammatories. His fur is slowly growing back.

It’s not been an easy 10 days. Lots of mixed emotions and with it all being over Christmas and New Year that’s only added to the heightened emotions. Trying to stay jolly for my children (who are so incredibly pragmatic about the whole thing).

Scoobs still loves going out for a good old sniff… he’s not keen on the lead (never has been) so stood still and wouldn’t move until we took it off and then he was free to have a little hobble and sniff on his own. Only 5 minute walks each time but enough to fight off the boredom and try to build up his strength.

His eating has been ok – he’s eaten all his food but he needs encouragement at times and a few times we have had to hand feed him. We’ve had quite a few visitors which always cheers him up and certainly hasn’t stopped his tail from wagging like a whip (ouch!)

We got Scoobs a new bed as the one he had just wasn’t big enough for him to lie completely flat in comfort with his wound as it is. It’s an orthopedic one with a a memory  foam mattress and he absolutely loves it. He seems a lot happier in that than his old bed.

The hardest thing for me at the moment and I’m just going to have to try and get used to it is the stares you get from other dog owners when you go out. Scooby is obviously still getting used to being a tripawd so it is obvious at the moment but I really don’t like the pitying stares!! I know people aren’t being malicious and it’s a natural thing to look at something out of the ordinary but it makes me feel sad. This is obviously an issue for me rather than Scoobs though so I just need to get over it!! 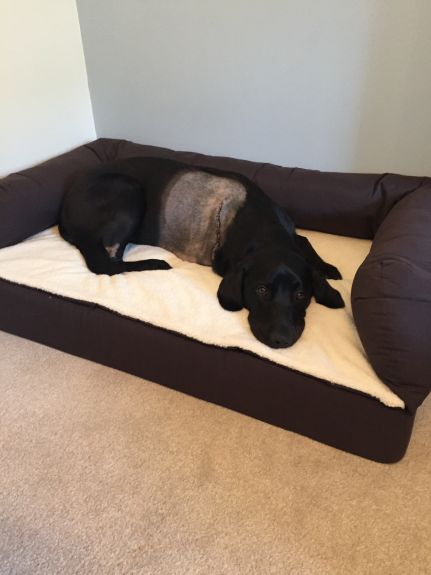 Add an excerpt to your posts to provide a summary for readers in many blog themes! 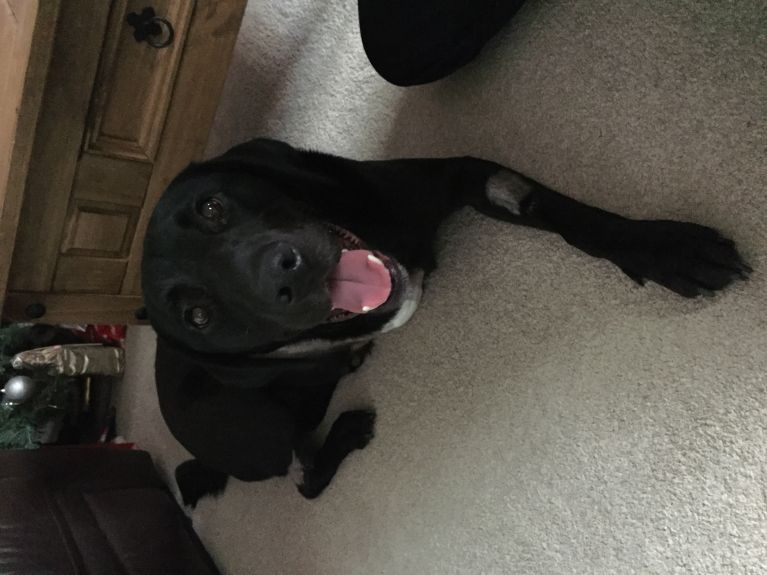 This is Scooby.. A 2 year old Labrador who loves tennis balls! His intermittent limp turned into a swollen leg that was eventually diagnosed as oesteosarcoma after X-rays and 2 bone biopsies.. Idon’t really know what I’m doing (and my photo has gone in sideways?!) but hoping this will work…

So Scooby is 24 hours+ post amputation of his front right leg that he has been having problems with for a few months. It’s also Christmas Day. I must say I think I’ve spent more time on the floor today than any other Christmas Day in my life (and I have twins!)

He seems to be coping ok but has been making a few whimpering noises. Think that might be the tramadol (painkillers) or even phantom (nerve) pains from what I’ve read about it.

We took the bandages off today as advised by our vet. It’s quite scary to see the long line of stitches and did upset my girls earlier so think we will put a t-shirt on him tomorrow.

I know it’s still early days so I have to keep reminding myself of that. He is managing to go to the toilet unaided which is good and he’s even tried engaging us with a ball and one of his Christmas toys today.

He scared me earlier when he made a very loud, almost squealing noise when he got off the sofa. I tried to help him down and think  might have inadvertently hurt him in the process. I felt awful!

Fingers crossed we have a better day tomorrow.

About Your Tripawds Blog:

New Tripawds Bloggers: Please review your default first blog post at left for lots of helpful links for getting started with your blog or review the Help Videos in your dashboard. Edit these widgets from your Appearance settings to remove this notice, upload a custom header photo, or choose from 130+ themes, and much more!


Tripawds Supporter sites have no ads!